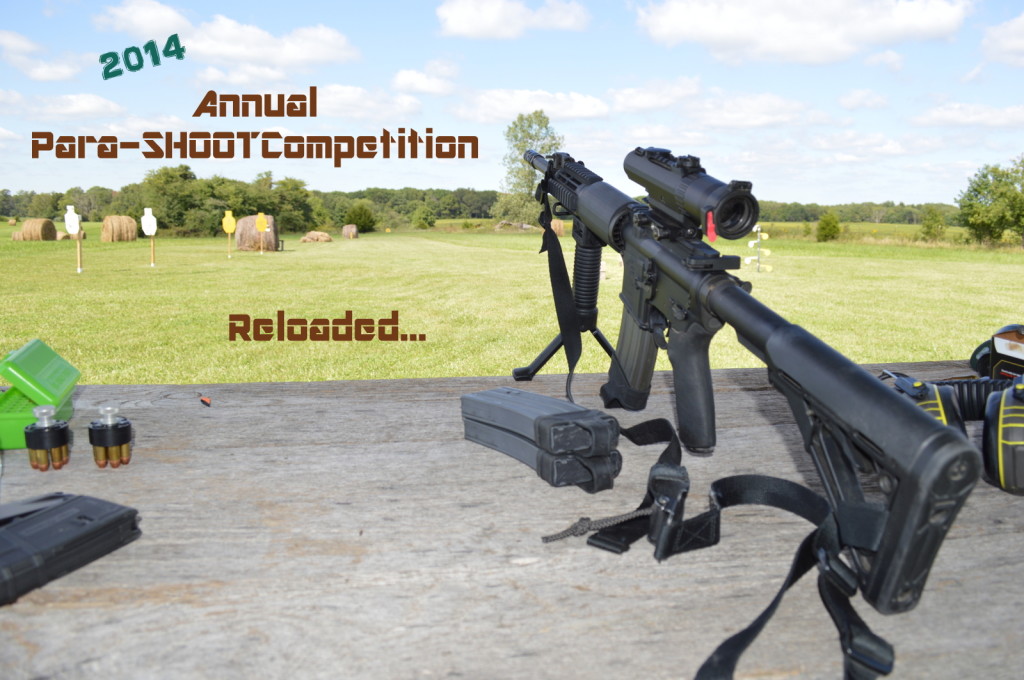 This years course and scoring made the event better so that Tandems and Students along with good canopy pilots had a better chance while challenging the Shooters. 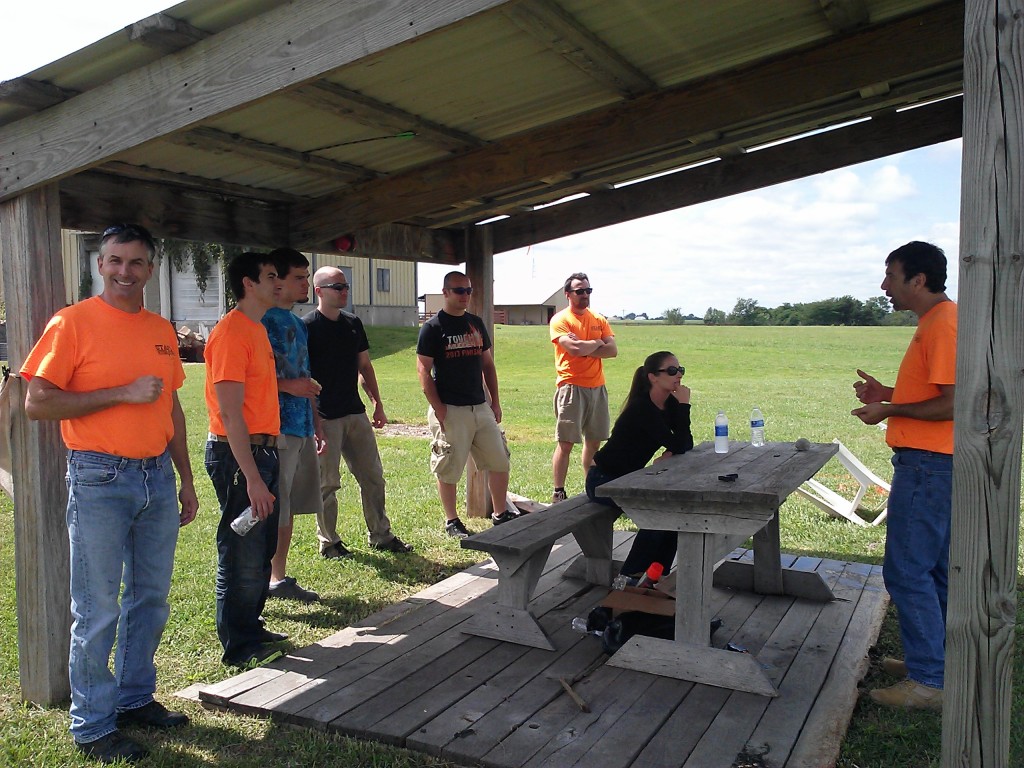 The Course started with the Parachute landing accuracy.  The scoring was 10 points for Dead Center on the Frisbee, 5 points for landing within the 10 meter diameter circle (Pro Rating), 3 points if within the 20 meter Diameter ring, and 1 point if landing with in the 40 meter Diameter ring (Student A licence Requirement)  Students, Tandems and experienced Skydivers were invited to participate.  Students received a 3 point landing handicap while Tandems received a 2 point handicap.

The event was timed and the fastest time determined ties.  A Par time was established and shooting had to stop and score tallied.

Here is what happened.

Early on a good score was posted Saturday morning by First time jumper Kevin T. on a Tandem with Van.  The landing was in the 3 point ring + 2 point handy cap and off he went on a sprint, shooting went well with 14 shooting points. This winning score of 19 lasted until Sunday afternoon. 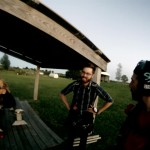 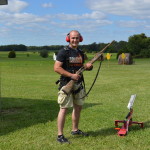 The women had the competitive spirit with Amber taking the lead.  Steve had some excuses about the windsock and landed her outside the outer ring for 0 points + 2 Tandem handicap.  Ambers shooting skills made up for the landing losses.  Awarding her the Ultimate Defense  Womens Self Defense Course Prize! 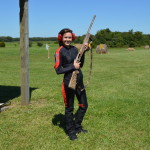 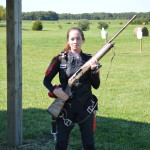 Student Jumper Joe K. even made it into an obstacle course by climbing over the red fence on his way to the Shooting Range but was beaten by Student Skydiver/ Manifester/ Packer/ all around Problem solver Richard K. with a Score of 17 and getting a perfect 6 rounds on steel with the Sig Semi Auto.  This wins Richard K. the Ultimate Defense One Hour Range Time gift Card for Best Student Skydiver Performance! 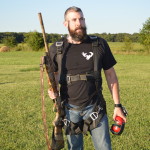 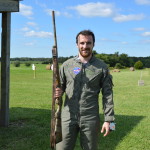 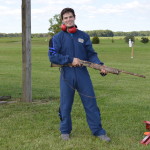 Previous Para-Shoot winners and Runner ups ran the course but could not duplicate their previous performances.  Jason T.  had a Shooting Score of 15 but could not duplicate last years landing accuracy.  Jamie H. was beaten by Van in the 2012 Para-Shoot with a points tie but lost to him on course time.  As to not lose like that again he pushed it hard and put up a great time of 96.1 seconds.  This speed hurt his initial landing and shooting but he still put on an impressive show with the S&W in Double action at 25 yards and cleaning up the rest of the course. 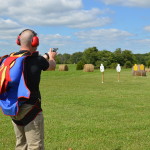 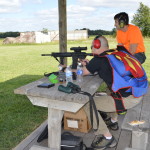 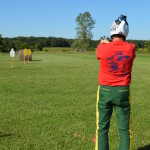 Louie made his run at the course with a landing score of 3 and shooting score of 17 putting him in points lead with a course time of 127 secs.

Van’s run at the course was marred with controversy even before the jump.  Jamie called cheating when on the plane during the ride up he spotted Van wearing a Student rig and 290 sq ft main. Van having demonstrated a Dead Center earlier in the Day with a Tandem and again with his FX 94 felt this was actually a handicap during his run at the course.   Van flew outside video of a Tandem and on landing scored a 5 missing the disc by 1 foot.  Ran the course with a 15 shot count tying him with Louie’s score of 20 but a time of 96 seconds put him in the lead. 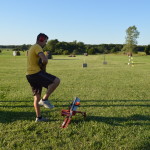 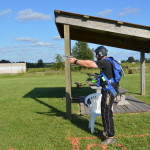 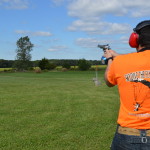 Now it was Steve’s turn after a long weekend of Tandems to run the course.  Van flew the plane and provided encouraging words to help Steve remove the pressure of trying not to lose face another year at “Steve’s” Para-Shoot Event.  Steve’s landing accuracy on target would make or break his chances at winning.  The other jumpers attempted to add pressure by dog-fighting him under canopy but he used this “play time” to relax and prepare.   He lined up and did an impressive job starting with a Dead Center on the Frisbee giving him 10 points for landing.  Now taking 20 seconds to undo his chest strap?  Van is always telling him not to spend so much time on the chest strap.  Even with this delay he still completes the course with the fastest time of 86.03 sec.  Steve’s Shooting score was a 13 giving him a total of 23 points and the best Overall Score. 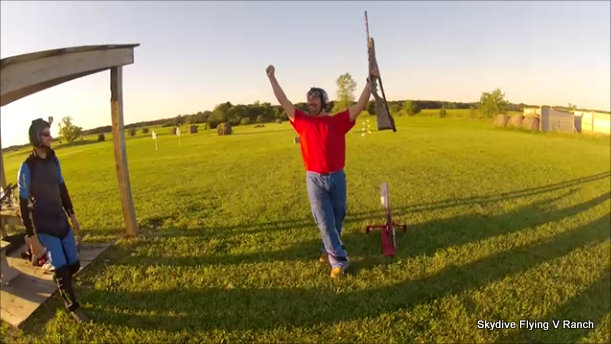 Saturday evening a BBQ with Ribs was put on by Emiko with everyone happily full videos were watched outside with Campfire, Hot tubbing and Skydiving Stories told.

Thank you to everyone who participated and helped with the event.  From a few feet back the course looked easy but the pressure of landing accuracy and the 125 yard run to the Shooting Range made those targets move in your sights.  We all enjoyed the big smiles this created after a run and that energy lasted all weekend! 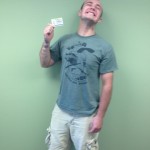 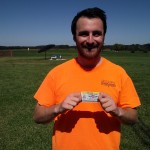